This fun photographic lotto game includes scenes from around the home. At level one, children match the action from the scene card to a playing card showing exactly the same verb, such as folding clothes. At level two, children match an action from the scene card to a playing card with an associated verb, such as folding a piece of paper. Four noun objects associated with each verb in the scene cards are also included as a simply matching game. These may also be used with four photographs of children to create simply picture sentences after the main activity. Includes four playing boards (12″ x 8 “), four placement boards (8 ” x 8 “), 54 photographic playing cards, and instructions written in English, French, German, and Spanish.

On the Chinese New Year, six-year-old Ernie will perform his first Lion Dance. An intimate look at a Chinese household ...
Read More

Smart Poly™ material has been designed for charts in the classroom and home. These charts are strong, durable, water resistant, ...
Read More 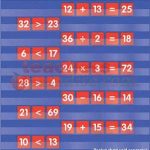 Giant dinosaur fun is on its way! Introducing the VELCRO® Brand BLOCKS™ Stegosaurus. This cool new toy is a construction ...
Read More